Next weekend will find me at the International Steampunk Symposium! I haven’t received an official schedule, but here’s where I think I’ll be presenting:

I hope to see you there!

In other news, I posted sneak peaks of my book covers on my Patreon, which you can view for only $1.00! My first short fiction collection and a novella should be dropping next month, just in time for PenguiCon, and I couldn’t possibly be more excited. More news on that when they go live!

Much like the award-winning anthology Steampunk World, Steampunk Universe will be a multicultural anthology of steampunk stories. But this time, the anthology will focus on characters who do not identify as abled or neurotypical.1

This call for submissions is aimed particularly at marginalized writers, especially those who are identify as members of a minority, LGBTQ, and particularly those themselves who do not identify as abled or neurotypical.

Stories are due by June 1, 2016 to steampunkuniverseantho@gmail.com. Ideally, decisions will be made by July 1, and the anthology will be crowdfunded shortly thereafter. Writers will be paid $.06/word for original stories. I’m not looking for reprints at this time. Deadline extensions will not be granted. Your story should be submitted in Standard Manuscript Format (please check and double-check that your name and email address are on the first page!) as an email attachment in .doc, .docx or .rtf format. The subject of your message should read [Submission: Story Title by Author Name]. If your submission doesn’t conform to these specifications it may be deleted unread.

What I’m looking for:

I’m unlikely to buy stories that:

The fastest way to get responses to questions is on Twitter. Questions may be directed to @steampunkpanda or @AlliterationInk. The best way to tell what kind of story I am likely to buy is to read Steampunk World.

1 So what happened to the original term here? Long story short, we were attempting to use a positive and inclusive term. We failed in that effort. After a lengthy discussion, the wording above was settled upon as a far better one that is inclusive, not demeaning, and respectful of the community.
2 This wording has been changed to emphasize that we are looking to maximize diversity from all regions and peoples in the limited space we have, not minimize or erase any group.

Steampunk World is now available for order! The interior artwork and Kickstarter-exclusive cover took a little longer than we anticipated, but most Kickstarter backers now have their copies of the book. So if you missed the Kickstarter, now’s your chance to get a copy!

The Steampunk lifestyle means a dedication to being fancy! 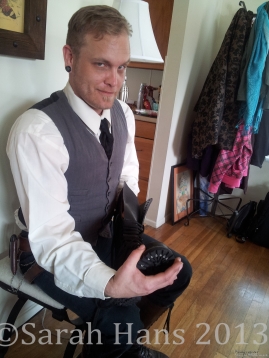 The ever-dapper Master of Arts, Aaron, showing me how to straight-lace my boots

For more pictures of fancy people, check out the Airship Archon Flickr Group or our Facebook Group. If you’d like to hang out with these fancy people, you’re in luck! This weekend we’re hosting our largest event yet (and possibly ever), the Privateer’s Promenade, featuring Ford Theater Reunion, Ooh La La Burlesque, a fire dancer, and more! This might be the only big event we ever have, so don’t miss it!

Only in Columbus, Ohio!

Here are some of my favorite photographs from recent Airship Archon events: 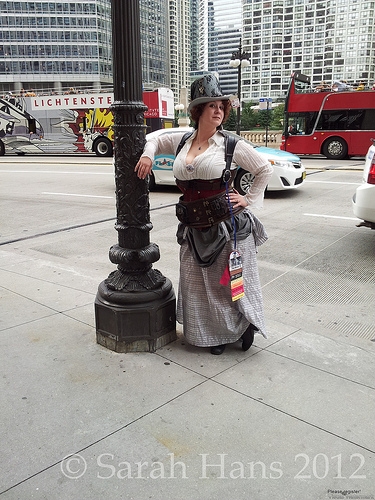 TerAnn brings Steampunk to the streets of Chicago 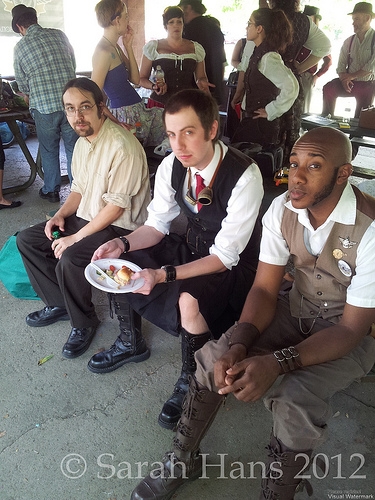 Three of my favorite gents at the annual picnic 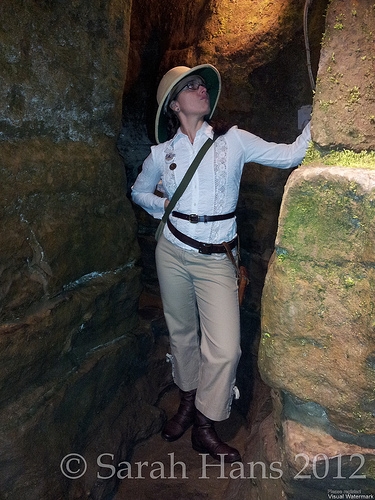 For more pictures of the Airship Archon’s events, you can visit this flickr group. If you’ll be in the Central Ohio area and you’d like to join us for some Steampunk fun, we always welcome new members and visitors. You can find our website with an events calendar here, or join our facebook group here.

Please click through to read my review at Doctor Fantastique’s!

I can’t stress enough what a great time I had at the Symposium. I’m so excited about World Steam Expo as a result that I started packing the day after I got home from the Symposium.

We also got the largest group photo of the Airship Archon in our history to date, but since it’s not my photo I’m waiting on permission from the photog before I can reproduce it here.

So who is going to the Symposium next year? What about World Steam Expo at the end of the month?

As you probably already know, I’m a member of the Airship Archon, a Steampunk costuming and funtime group based out of Columbus, Ohio. We’ve been in the news a bit lately: an interview with our Captain appeared on The Steampunk Chronicle last month, and a photograph of the group appeared in an io9 article (sadly taken before I became involved with the group). I’m proud to say that we’ve become one of the premiere Steampunk groups in the Midwest, and maybe even the nation–and we’re remarkably drama-free for such a large and diverse group.

We’ve had quite a few events lately, and I thought I’d share a few of my favorite photos:

The Airship Archon seeing "Sherlock Holmes: A Game of Shadows."

Ladies of the Archon outside Mozart's after High Tea 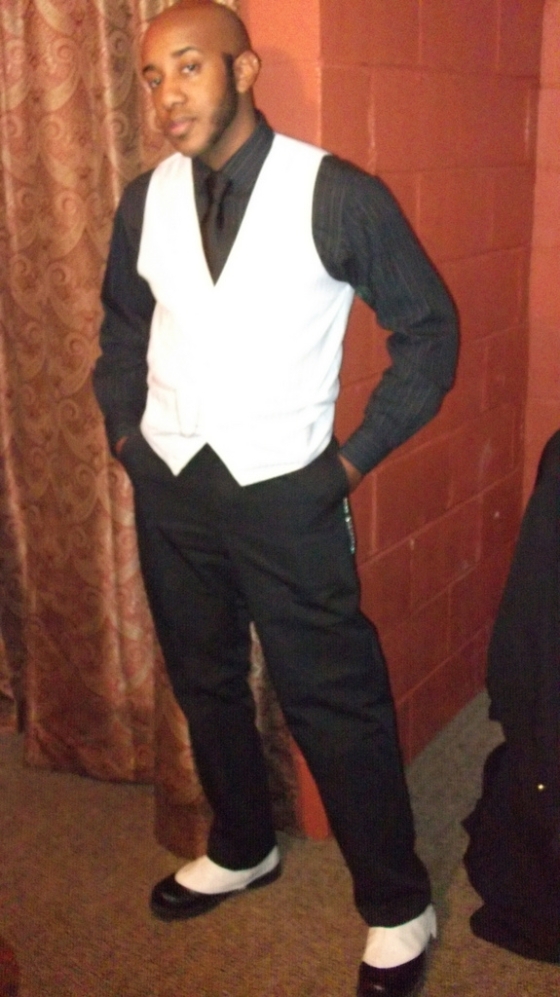 One for the ladies--Captain LaGrange at High Tea

For more photographs of our group, you can visit the Airship Archon Flickr Group. There was another event, Cocktails at the Conservatory, last week, but unfortunately I was unable to attend due to a touch of the Consumption. Our next event will probably be a Build Day, and several of us will be attending  upcoming local conventions. To keep up with our activities, I recommend joining our facebook group. We do have a website, but it’s sporadically updated and less reliable than the facebook group. We always welcome new members and we’d love to help you put together a Steampunk look!

My Steampunk embroidery panel at TeslaCon this weekend was VERY popular–much moreso than I expected! Because there were a few people who didn’t get handouts, I promised I’d post them here for anyone who wants a copy. I probably won’t be doing this panel again except possibly at a local convention, because the supplies took up too much space in my luggage! 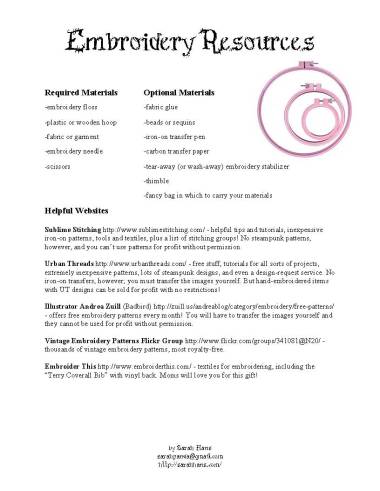 Thanks to everyone who attended the panel; I had a great time and it’s nice to have so many people be so enthused about a craft I love!  I told you embroidery was easier than you thought! Also, thanks to Niamh, the designer behind Urban Threads, who made a surprise appearance at the panel and totally made my day.  More on TeslaCon when I have a chance to upload pictures and collect my thoughts!

Doc F’s Issue Two is here, and features an article by yours truly on steampunk vacations in Ohio. You can see a preview or buy a copy here!

And don’t forget about the Doctor Fantastique’s kickstarter, which hopefully will fund a print run of the magazine and possibly even allow Doc F’s to pay its contributors (one of whom is me). Please consider becoming a backer! There are many fabulous rewards for those who do…not least of which is my gratitude.

September was chock full of steampunk events. Here are a few of my favorite photos. You can find more on my flickr set. 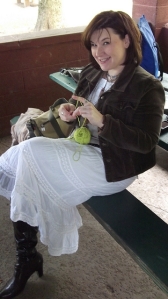 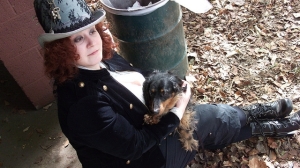 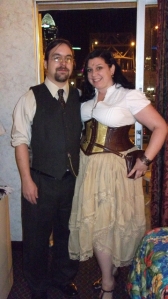 Me and my beau before the Time Traveler's Ball. He cleans up nicely, don't you think? 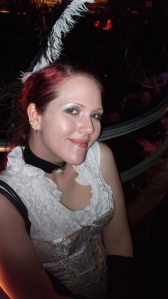 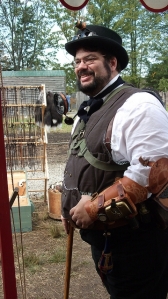 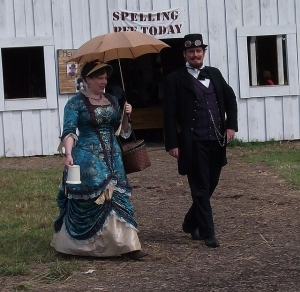 I don't know these people, but they were very well dressed at the Old West Festival