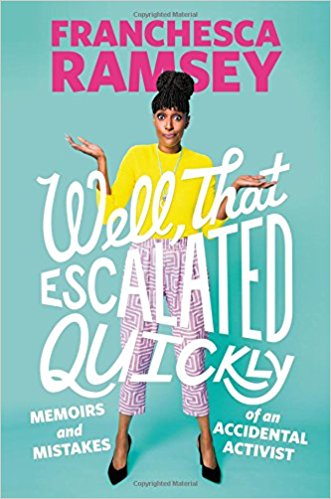 In case you don’t know, Franchesca Ramsey is a YouTube personality and host of the popular MTV show Decoded, which breaks down racial issues in a quick, easy-to-understand way with lots of colorful graphics and sound effects. I picked up this book because I’m a fan of Decoded, and because I liked the “memoirs and mistakes” portion of the title. I’ve certainly made lots of mistakes, both in real life and online, and I was intrigued that someone who is perceived as a fearless leader of social justice warriors not only made mistakes, but was going to confess to them and (hopefully) disclose how to bounce back from them.

The book is mainly a reflection on Ramsey’s career, which started out on YouTube and evolved into writing, producing, and appearing on shows like The Nightly Show and Decoded. The parts I appreciated the most were her frank, honest discussions of her mistakes, spanning interviews and YouTube videos to podcasts and Facebook discussions, especially the sobbing mess she became after Black Twitter came for her. While I would never wish an internet dragging on anyone, having been dragged myself, it made me feel a lot better that even really intelligent, thoughtful, compassionate people like Ramsey occasionally get it wrong and then, whether they have anxiety disorders or not, crumble into a hot mess when they’re attacked for it (thought I suspect her recovery time was probably a lot shorter than mine. Thanks anxiety).

I also especially appreciated her chapter on Calling In. Ramsey makes a compelling case for Calling In instead of Calling Out, which is something I’ve been thinking about a lot lately. The act of Calling Out certainly creates an outraged stir, but it can also ruin careers, or drive people (like me) off the internet. Sometimes, Calling Out is appropriate, as with large companies (and conventions, *ahem Worldcon ahem*) that are prone to ignoring individual marginalized voices. And I’d argue it’s probably the way to go for violent hate speech, as well, because it’s probably not safe to engage one-on-one with someone who wants you to see you dead. But when dealing with well-meaning individuals who have made a mistake, Ramsey urges us to try Calling In instead, before resorting to public humiliation. Essentially, Calling In involves reaching out compassionately one-on-one to the individual who has offended, and providing them with resources and advice. It requires a little more personal effort–you can’t just retweet a call for the person’s head and be done with the conversation–but it’s ultimately more rewarding in the long term, creating more allies rather than alienating them, and helping people to grow and become better instead of bitter. Obviously we don’t all have the spoons to Call In all the time, but I think it’s a good goal. Compassion should always be at the forefront of our minds, and it’s too easy to forget that when the Horn of Gondor has been sounded and the troops are rallying for yet another call out campaign.

At the end of the book, Ramsey also has a couple of chapters with resources, including book titles she recommends for further reading, snappy and appropriate comebacks for passive-aggressive or microaggressive comments you might run into on the internet or in real life, and a handy list of terms that’s useful for anyone who is just getting started on their social justice journey.

All in all this is a very informative, intelligent, funny, and compassionate book that I would recommend to anyone who exists on the internet, especially if you’re a creative.

You can read more of my book reviews on Goodreads. If you enjoyed this post, please consider buying my new fiction collection or backing my Patreon. I’m not currently accepting books for review, but I will consider recommendations, so comment away! Thanks for reading! 🙂

Genre: Horror Format: Hardback novel I picked up Meddling Kids because Goodreads recommended it to me and because I absolutely loved the cover. If you like Scooby Doo, Stranger Things, the Stephen King novel IT, or 80’s/90’s nostalgia horror like My Best Friend’s Exorcism, … END_OF_DOCUMENT_TOKEN_TO_BE_REPLACED

Stories from a few of the authors of the Clarion Write-A-Thon:

“The Book of Autumn” by Rachel Acks

“A Study in Flesh and Mind” by Liz Argall

“War of the Lights” by Madeleine Rose Reardon Dimond

As you can see, I only got through the D’s. You can browse the author list for more stories here. Assuming that I can find more time to read, I’ll post another of these next month!

I haven’t made a recommended reading post in some time, so here’s a three-fer to keep you busy.

A good friend turned me on to this Elizabeth Bear story about shoggoths, monsters of Lovecraftian lore. It’s longer than the stories I usually promote in this space, but not by much, and it’s worth the extra few minutes it takes to finish. It’s also chock full of delicious social commentary and historical context, two things I love to see in genre fiction.

Shameless plug: For more Lovecraft-style horror stories, I suggest Historical Lovecraft: Tales of Horror Through Time. The ebook is only $3.99!

Did you love Choose Your Own Adventure books as much as I did? Well here’s a (delightfully brief) CYOA for more mature audiences, by Kat Howard, who is obviously very talented.

Choose Your Own Adventure

Every now and again a really awesome story just kind of falls in my lap. This is an example of one such story, which was discovered on the livejournal facebook page, of all places. It’s a poignant little tale that reminded me of what it was like to be in Middle School, watching kids who were your friends over the summer avoid you in the hallways nine months out of the year. It brought up painful memories, perhaps bittersweet because of lessons learned since then. And, because I like speculative fiction, this story also features a little fantasy element to keep things interesting.

This week I’ve been busy with last-minute craziness for the upcoming release of The Crimson Pact: Volume 1 and Millennicon, which is this weekend, so I haven’t had much time for posting! Who knew being a writer would be so much work?!

Today’s recommended reading was found while trawling the internet for zombie anthologies accepting submissions. Written in ultra-creepy second person, to horrific effect, it inspired the perspective I used in “It Wants.” This story might be the best zombie story I’ve ever read. Not for the faint of heart!

The creator of the helpful site Dark Markets also has a blog, Sex Scenes with Monsters, and sometimes she posts fiction. It’s really good, too. Here are a couple of my favorites:

Although there isn’t any particularly bad language or nudity or anything particularly objectionable, you may want to avoid explaining why you went to a site that mentions sex and monsters to your boss, so NSFW applies here.

This week’s story is neither horror, nor steampunk. It’s not even science fiction. But it is good. It’s also written by my friend Steve Saus, and it has been chosen by Every Day Fiction as one of their top stories of 2010.

This story is an excellent example of how to do flash fiction brilliantly. Every word is chosen for maximum impact, the story is about a life-changing moment for a character with whom we immediately identify, and nothing is over-explained. I actually felt sympathy for the character even though I knew him for less than a thousand words.  That’s effective storytelling!