Jay Lake has unfortunately passed away. Although I only met Jay in person twice, he had a big impact on me as a writing professional. Last year, when I was putting together Steampunk World, I sent him this email.

I read your blog post today about your declining health. I am so, so sorry to hear it. While I would love to receive a story from you for Steampunk World, new or reprint, I don’t expect one. It’s a trivial thing in the grand scheme. I’m sure it’s not high on your to-do list right now, and it’s fine if it stays that way.

I wanted to tell you how honored I have been to know you. I know we’ve only met twice (you probably don’t remember the first time, at the rave at World Steam Expo last year, and that’s okay) but you definitely left an impression. You were the only Guest of Honor up late partying into the wee hours at WSE, for one, and I remember thinking “Everyone was right, this guy is awesome!”

For two, you were the first writer I approached about submitting a story to Steampunk World (go big or go home, right?) at Chicon, and you said yes.  And that might seem like a small thing to you, but to me that was huge. Because believe it or not I’m a shy, rather socially awkward person. I was (and am) this small-time writer nobody had ever heard of, so I was fully expecting you to say no, but you didn’t. You were lovely and kind and generous with your time and your words and because of that, because you said yes, I’ve had the courage to ask other authors to do projects with me, and some of them have said yes. And every time I’m scared to ask someone to be involved in a project with me I just think about how Jay Lake said yes. And every time it gets a little easier, I get a little bolder and braver.

It’s funny how the smallest gestures can change the world for people. And I just wanted you to know that you changed mine with that little “yes.”

I thought about waiting to post those words in a tribute blog post in the event of Jay’s death instead of bothering Jay with an email, but then I thought what a pity it would be if he never knew what a positive influence he’d been on me. So I sent them to him a year ago. I wasn’t expecting to get a response at all (because…priorities). Instead, Jay kindly sent me a story for Steampunk World. Because that’s the kind of guy Jay Lake was.

There’s a good chance that without Jay’s participation, Steampunk World would not have been so successful. Thus, the publisher and I will be donating 20% of the proceeds from the anthology’s retail sales to the memorial fund mentioned on his blog. It’s a small gesture but hopefully one that will give other cancer patients more time with their families.

I will miss working with Jay very much, but I’m very glad we have his words to enjoy again and again in the form of books and stories and essays…and also in our kindness and generosity to each other. Has anyone made a bumper sticker that says WWJLD? 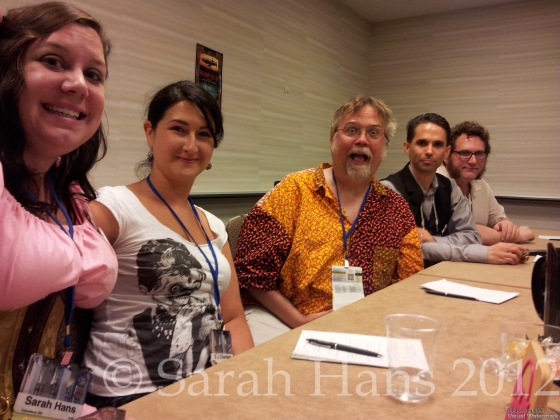