Back in October, ABC introduced a new show called Once Upon A Time. The first few episodes were promising–the writing was good, the acting was decent, and the show featured several actors I really like (Robert Carlyle and Ginnifer Goodwin chief among them). But as the show wore on, I started to notice that everything is not peachy keen in fairy land, and now when I watch Once Upon A Time I mainly see missed opportunities.

The first of these missed opportunities deals with the witches. European fairy tales are full of witches. Instead of taking the traditional route, and presenting these witches as gnarled old hags, ABC decided to cast various gorgeous blonde actresses in the roles. 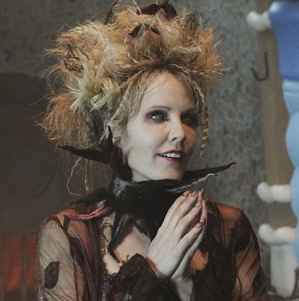 Emma Caulfield is hungry and blind, but not particularly scary.

I like both of these actresses and I really have no problem with their appearances on the show, but the more I think about the witches, the sadder I am. ABC had an opportunity to do something really interesting here, and instead they fell back on blondes with cleavage.  They could have cast ethnically interesting actresses (more on this later) or gone a more Del Toro route and created truly frightening witches using puppetry and makeup effects.  Instead, we get teased hair and pouty lips. Before you argue that “this is a kid’s show, it shouldn’t have really scary monsters!” please keep in mind that this show so far includes tons of murder, betrayal, curses, and other adult themes. It’s a dark show, and not for children. I’d love to see ABC stop pulling punches and start taking it to the dark, adult place the original fairy tales went instead of this weak pandering.

The second missed opportunity on this show relates to the  primary villain, The Evil Queen, aka Regina. Firstly, here’s another chance ABC missed to cast a person of color. While Snow White pretty much has to be pale and dark-haired, there’s no rule that says the Queen has to be equally white.

Admittedly, the Evil Queen does get to wear the best clothes.

One of the things I loved initially about OUAT was the preponderance of female leads on the show, but apparently casting one non-white woman in one of these roles was simply asking for too much. Just as frustrating (for me) as this white-washing, however, is the lackluster nature of Regina’s character. Episode after episode is presented as filler, with no real relation to the story arc, introducing characters we barely know, don’t care about, and will probably never see again (anyone know what happened to Hansel and Gretel? What about Sister Astrid? Yeah). The main crux of these stories seems to be to pad the main Snow White-Emma Swan-Prince Charming storyline and also to prove, again and again, just how Really Very Evil Regina Is. She is behind almost every nasty thing that happens to everyone in fairy land, and her character has no motivation except for being greedy and cruel. That’s it. She’s as one-dimensional as a plain crepe, and about as satisfying. We’ve seen countless back stories for scores of characters we don’t care about, and even a great origin story for the wicked manipulator Rumpelstiltskin, but we still have no insight into the Evil Queen’s personality and motivations.

ABC obviously thinks we should just accept that Regina Is Evil, and move on. Maybe it’s my fault for expecting shows to have fully developed, believable, three-dimensional characters, I dunno. There is, however, one spark of hope: Regina herself recently said the line “Evil is not born, it’s made.” So, okay, how was Regina made into this completely unremorseful, greedy, vengeful person? When does she get her origin story, instead of just popping up to cause misery in the origin story of every other character?

I promised more on the issue of race, which is perhaps the most troubling thing about this show, so here goes: Storybrooke and its inhabitants are a bunch of the whitest white folks to ever white. With the exception of the Genie/Mirror/Sydney, everyone in Storybrooke is white. There was an African-American (African-Fairylander?) fairy godmother for about half a second in the Cinderella episode, but she was promptly vaporized by Rumpelstiltskin. In another episode there was an Asian knight, which was entirely random, and of course deeply unsatisfying as he only had one line. Perhaps even more disturbing, the only black person on the show PLAYS A MIRROR. Admittedly, in Storybrooke he’s a reporter, and he used to be a Genie, but ultimately, I find that the fact that ABC could only bring themselves to cast a person of color as an inanimate object disappointing and kind of sickening.

The one black actor doesn't even rate inclusion in the cast photo. He plays a mirror, and there's even a mirror in this picture that would be a convenient way to include him, but instead we get Prince Charming twice. *facepalm*

He's a reporter, and the newspaper is called The Mirror. GET IT? Hurrrr

The beginning of every show promises that the town is inhabited by “every story book character you’ve ever known,” but so far I’ve only seen characters from European stories. Where are Aesop’s Fables? What about Native American stories, Aboriginal stories, Chinese and Japanese stories?

In the end, what I find most frustrating about this show relates to the fact that ABC is owned by Disney. Nearly every episode feels like one long advertisement for the Disney version of each story. Where Disney doesn’t have a movie version, like with Hansel and Gretel and Little Red Riding Hood, they still maintain the Disney tropes. ABC can’t do what I want them to do–step outside their comfort zone and go somewhere really interesting–and unfortunately, I don’t think they will, because Disney has a strangle hold on the narrative for this show. So we will continue to be spoon-fed the Disney version of events, where True Love always wins, and nobody ever really gets hurt, and everyone is white, because this is the narrative with which we’ve all become comfortable in our Disneyfied culture.

The problem is that what is comfortable is not always what’s best. Risks and challenging the status quo are what set apart shows that are really good from those that are mediocre and forgettable. Unfortunately,  OUAT  is treading the path well-traveled rather than the one that is unique and new and inspiring. While it might mean viewers now, playing it safe doesn’t make for memorable, ground-breaking television, and OUAT is missing all its chances to become that kind of show. What a pity.