I wonder if this post title will get me a bunch of exciting new spambot comments! Bring it on pr0nbots!

Anyway, I digress. Here are my thoughts on the recent episodes of my stories.

Hell on Wheels – You’re not watching this show? WHY NOT?! The first two episodes blew me away–I was expecting the same tired cowboy fare but what I got was a rich, textured, vibrant show with gritty, believable characters…and a metric buttload of murder.  The story centers around a former confederate soldier working on the Union Pacific Railroad in the 1860’s…who is also looking to avenge his murdered wife, hunting down the union soldiers who violated her one by one.  Anson Mount (great name) holds the show together with his performance as the main character, and Colm Meaney is really convincing as the greedy, despicable rail tycoon. The pilot episode was full of good writing, decent acting, fun action, and oh did I mention lots of murder? I was worried the second episode wouldn’t keep up the pace of the first, but it was just as good, or maybe better. 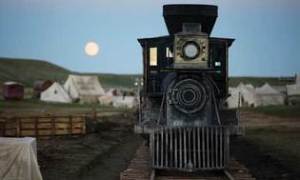 Boardwalk Empire – This show is so, so very good. Much of the acting is subtle and nuanced, the dialogue laden with meaning. My only criticism is that sometimes the meetings go on a bit long, but usually during these scenes I’m distracted by the amazing set and striking cinematography–the Commodore’s parlor full of taxidermy beasts, the expanse of beach or boardwalk, the beauty of rooms decorated with real Tiffany glass and hardwood floors. Then there are the characters: Nucky Thompson in his smart double-breasted suits; Jimmy’s mother, Gillian Darmody, with her freakishly ageless face and beautiful clothes; Mrs. Schroeder’s fantastically detailed hats and perfectly curled hair. Even the shoes are fantastic. I feel like I should be bored by long scenes of gangsters plotting against each other, but instead I’m hypnotized by the 1920’s. I wouldn’t be surprised if flapper dresses and cloche hats (and double-breasted pinstripe suits) start showing up on the runway soon. Oh and (SPOILERS) Nucky is shot, and Mrs. Schroeder cheats on him with a totally swoon-worthy Irish fellow, and the Commodore has a stroke and Gillian Darmody beats the crap out of him (at last!! This scene was so gratifying)…and the most tragic character on the show, Richard Harrow, who was also apparently the most popular Boardwalk costume at Halloween, contemplates suicide. Let’s get this man a girlfriend please. 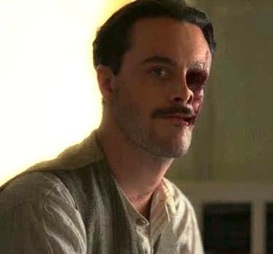 C'mon ladies, what's not to love?

The Walking Dead – So when the season started I wrote a diatribe about how generally disappointed I was. Being a long-time fan of the comics, I wanted the show to be as horrifying and tense as the original material. I was gratified by the first few episodes of season 1, but it quickly declined, and the first episode of season 2 was, in some ways, hilariously bad. Fortunately the last few episodes have given me renewed hope for this show. I’ve got a serious crush on Daryl, the redneck played by heart-stopper Norman Reedus, who is an entirely new addition to the cast of characters. I gasped twice during last night’s episode, which says a lot. The plot has elements from the comics but also new ones, which keeps me guessing but also gives me a thrill every time something from the comics is revealed. So, hooray! This show has been redeemed! Let’s hope it keeps this up and doesn’t descend into suckatude again. 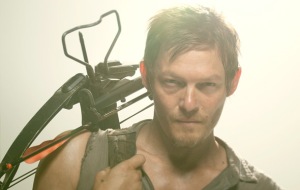 He'll risk his life to save your kid, and you only just met. You can't tell me that's not sexy.

American Horror Story – I really liked this show when it began, and it has maintained an incredible level of tension and horror. The problem is that I’m starting to become numb to it. A show has to have lows in order for the highs to be effective–maybe this is the problem with long-running horror serials, I don’t know. But now that the ghosts have been revealed as such, the show has lost some of its mystery, and the Harmon family continuing to reside in this horrible place is starting to become silly. That said, the Halloween episode was amazing and I cried a little. If Jamie Brewer doesn’t win an Emmy for her portrayal of the creepy Down Syndrome-afflicted medium Adelaide, then there is no justice in this world.  Her desperation to be “a pretty girl” for Halloween was almost palpable. 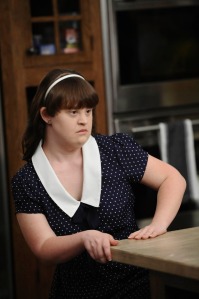 Once Upon a Time – I really enjoy this show. In the most recent episode we were treated to the history of Snow White and Prince Charming falling in love, which was really sweet–as it turns out Snow was a fugitive living in the forest and robbing royals while making deals with trolls and plotting her evil stepmother’s demise. I like that even though this show is produced by Disney, and therefore does have some saccharine “true love is forever” overtones, the heroines are not shrinking violets there to be rescued by princes. Emma Swan is a bounty hunter! Snow White is a bandit! The evil queen is the mayor! This show has a lot of strong female leads, unlike most other shows on television right now. Honestly, though, Ginnifer Goodwin’s sensitive but tough portrayal of Snow White/Mary Margaret is the reason I keep coming back to this show. I’m hoping we’ll see some more Robert Carlyle in future episodes. You have no excuse for not watching this show, as all the episodes are available in HD for free, with minimal commercials, on ABC Go. 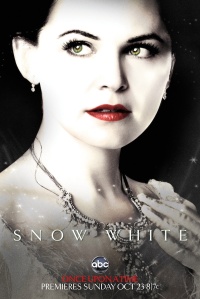 Self-rescuing princess, thank you very much

Being Human – I’ve been watching the UK version of this show on Netflix. The premise of a vampire, werewolf, and ghost living together in a house seems really far-fetched and silly, but this show pulls it off, with heart to spare. I mourn for the plights of murdered Annie, cursed George, and vampire Mitchell. There’s lots of tea, revelation, love, and heartache in this series. Other things I love about it: British accents, a love interest who isn’t traditionally pretty, and interracial relationships offered without comment. It’s a British show, after all, so we can expect all of those things, which may be why I adore UK shows so much. Please don’t spoiler this for me if you’re current; I’m still on the first season so there are lots of things I haven’t yet seen!

They're sexy, they're cursed, they're British